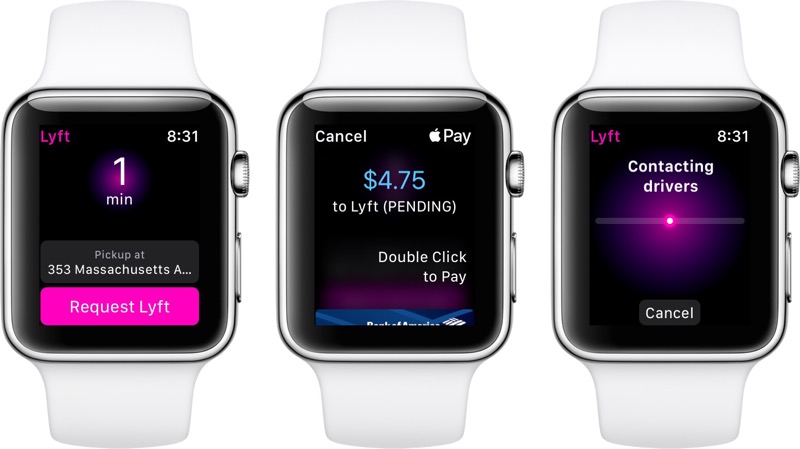 I mentioned in my last post that I’d really like to try out Lyft on Apple Watch. At the time, I couldn’t get the app to launch1, but I reached out to Lyft support and was promised that a fix was coming soon; sure enough, the app was updated just a few days later. I’ve had a few chances to try out Lyft on the Watch this week while my iPhone was dead2 and thought that I’d report on the collective experience.

Overall, it works pretty well. Launching the app brings up a screen that shows me roughly how long it’ll take for a Lyft to get to me, and lets me request a ride to my current location. I can change the pickup location to either my Home or Work address (pre-filled in the Lyft app on iPhone), or I can specify a new address by voice. I was worried that I wouldn’t be able to request a ride with Apple Pay — I have no saved credit cards in either Lyft or Uber, and that prevented me from using Uber on Apple Watch the last time I tried — but there was a native interface for that and I was able to request the ride with no problems. Once your payment processes, it contacts nearby drivers and matches you with one. You can now see the ETA, an image of the car, and the license plate number. Scrolling down, you can see the name and a picture of your driver, and you have options to call or text them from the Watch. After the ride, I have the options to tip and rate my driver.

Under most circumstances, this should work great. The first couple of times that I used the app, it did. I’ve had a number of (relatively minor) issues though that I’d like to touch on.

I almost never use my current location as a pickup address for Lyft. It’s usually an estimate, and I fine-tune it to make sure the ride goes to the right place. The last time I tried to use Lyft on the Watch, it had the address as 350 Mass Ave., which was across the street from me. I figured I’d change it to 353 Mass Ave., not because I was being lazy but because we would be heading in that direction anyways and I wanted to make navigation easier. Siri recognized the address fine, and I thought everything was going alright, until the driver ‘arrived’ a few minutes later and called me. Lyft had taken him to that address in Boston, while I was in Cambridge. I asked him to cancel the ride, paid the fee, and I called another car. I suppose I’ll just have to stick to using current location while on the Watch, because the screen isn’t large enough for me to suggest a feasible solution3.

When the driver is on the way, the app gives me an ETA but I wish it’d show me where they are. Sometimes the ETA is wildly off, and I’d like to be able to see both where they are and which direction they’re coming from. The Maps app on the Watch handles this well by letting you swipe left during navigation to see a map, and I wish Lyft would adopt this. Don’t make it the primary view, but have the option around.

Lastly, there’s currently no way to add a drop-off destination on the Watch. I didn’t think that this would be an issue, but I’ve had drivers accept my ride request and cancel shortly after on two (out of three) separate occasions. I imagine that’s why, because that never happens on iPhone. Given that I pretty much only call a Lyft on my Watch when my iPhone is dead and I’m trying to get home, I’d appreciate having the same interface as pickups for drop-offs, so that I could quickly tap ‘Home’ and save having to have my driver plug it in himself. Having a drop-off address would also allow Lyft to give me an estimate of what my trip would cost at the time of booking.

As it stands, the app is good enough. It does everything that I would expect it to, but it doesn’t go above and beyond. I’d love to see any of the above features were added, though I’m not holding my breath on that.