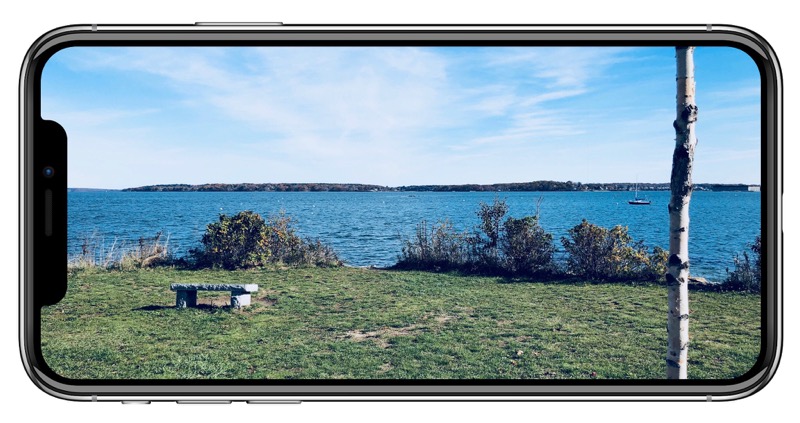 I really didn’t want to write a first impressions post — there are so many out there already — but I have a lot of thoughts about this phone, I had to share a few of them.

I’ve had every iPhone since the iPhone 4, all relatively close to launch day (and all on launch day since the iPhone 5). I’m a nerd; I obsess over the details, the minutiae, and could go on for hours about the subtle (and not so subtle) differences between each generation. My friends, however, are not. For a few years now, I’ve had to fend the “so what’s new about it” questions. Not this year.

Everyone knows about this phone. Even if they don’t know what’s new per se, they know that there’s a lot of hype around this it and they’re genuinely curious to find out why. Better yet, everyone loves it. It’s always something different: Some are drawn to Animoji, some to the OLED display, some to the camera. One of my friends’ fingerprints never worked with Touch ID, and he’s really looking forward to having a phone without it. It’s been a big hit.

There are always going to be those that still murmur “I can’t believe you spent $1,000 on a phone.” I always respond with “I actually spent almost $1,500 on it!”1 It doesn’t go well. Some of them can still appreciate what the phone has to offer, others stop at the price tag. That’s fine. This is ‘the phone of the future,’ so they’ll get it one day. To me, this isn’t that much more than what I was already spending on my iPhone. I’ll pay the few hundred dollars premium to have the future today. Old iPhones still have good resale value, and the difference is worth it to me. Price is a touchy subject — everyone values things differently. Get it if you can, don’t get it if you can’t. 🤷🏾‍♂️

The physical design of this phone is fantastic. I went with the Space Gray model but it was really a coin toss between that and the Silver, which I got for my brother. They both look and feel incredibly premium. Yet for as much as I love the all-glass design, it gives me pause. During my seven years as an iPhone owner, the only one I’ve ever cracked (accidentally) is the back glass of the iPhone 4s — and I’ve never been one to use a case. This hasn’t been a problem in daily use but I felt a little uncomfortable taking it with me to the gym, so I bought the Apple Leather Case2. I owned this case briefly a few years ago with my iPhone 6 before selling it to a friend, and it’s been improved since, so I knew that I’d like it. I plan to use it when I go to the gym and when I travel, and to continue to use the phone without a case everywhere else. It’s worked well so far.

The next big design point is the notch. I don’t get the fuss around it at all. Sure, I would rather it not be there, but the tech to make that happen doesn’t exist yet. In terms of having the notch as-is (with the ‘ears’), or blacking it out and hiding it with software, I much prefer having the ears. This phone truly feels all-screen — there’s no forehead. It wouldn’t feel that way with a ‘hidden’ notch. It doesn’t hide content, either3. Thanks to the true-black OLED display, watching video just looks as though you’re watching it on an iPhone 7. Not only is it not a big deal, but I’ve actually grown to enjoy the notch as a design element.

Lastly, I wanted to touch on app design. All but two of the apps on my home screen have been updated to support the iPhone X4. That definitely makes this the easiest transition between major iPhone redesigns I’ve experienced yet. However, I would like to see developers do more with true-black dark modes on this phone. The OLED display really makes it look as though the screen is ‘off’ except for the interface elements that are ‘on.’ It’s hard to describe, but easy to demo. Ulysses and Reeder have great dark modes that really show this off. Furthermore, I’d like to see more apps make it easier to switch between light and dark modes. I don’t like having dark mode always on — only really at night. Tweetbot makes this dead simple with a two-finger swipe gesture up or down.

Better still, I’d love to see Apple take a swing at a native dark mode with iOS 12. Having it at the system level (maybe with a toggle in Control Center) with native dark mode APIs for developers to implement would be a dream, and frankly long overdue. It would probably have a decent impact on battery life, too.5

After doing some research, I ended up settling with the IKEA Rallen integrated charger. I drilled a hole in my desk, fit it in, and have used it every night since. While I plan to write something up about this later in the week, the gist of it is: It’s about as fast as the charger that ships with the iPhone, which is much slower than the super-fast iPad chargers that I’ve been using recently, so it’s noticeably slower. This isn’t really a big deal in practice, because I tend to charge my phone overnight and it’s getting to 100% by the time I wake up either way, but if I need a quick top-up midday I’m still going to plug it in.

It’s taken me this long to get to Face ID because honestly, in practice, I don’t really think about it. It works really well and you get used to it within a day or two. There were a couple of hiccups when I just woke up the first day, but it definitely seems to be learning because it hasn’t made that mistake since.

I don’t have much more to say here, which is the highest praise that I can give this. It unlocks my phone every time, even right after a shower or a workout where Touch ID would fail previously. I’ve even tried it with a number of hoodies and winter jackets6 and it’s worked every time. I thought the thick, furry Canada Goose hood might trip it but nope. Oh and unlocking apps that require authentication is super cool; you just wait a second for your phone to authenticate you, instead of actively reaching your thumb down to authenticate yourself. It’s the little things.

There isn’t a lot to complain about honestly, but I’ve definitely had a few minor inconveniences. For some reason, Face ID only works in portrait orientation, so if I’m lying down or at an angle I need to make sure that my phone is at that angle too, otherwise it won’t work. Also, when I wake up in the morning and grab my phone, I sometimes have a hard time keeping my eyes open while staring at the display so Face ID doesn’t work (though I probably shouldn’t be trying to use my phone if I can’t keep my eyes open). Those are both incredibly minor issues though. More pertinently, it’s been getting cold recently, and I’ve noticed that the display has been locking up in the for the first few minutes when it’s out in the cold. Apple says that this is a software issue and that a fix should be coming out soon. That’s great to hear because if this were a hardware issue, it would be a massive failure. Boston has only been cold for a few days and this has already been a noticeable irritation.

There are a couple more software issues that I have. The keyboard has been elevated to make for more convenient typing, which is good, but there’s a lot of wasted space underneath. I’m sure this is just a version one problem, but I really wish that Apple would do something with that space. Landscape support on this phone is also a big step back from the Plus-line of iPhones that I’ve grown accustomed to. I find myself almost never using it anymore, except to watch video, which is a real bummer.

There’s a lot more that I would like to cover (battery, camera, performance, the lack of a home button, etc.) but I’m already running way longer than intended. The short of it is that the end-to-end software and hardware experience of this iPhone feels much more complete than any before it. Between the responsiveness of the display and the more natural animations, I find myself drawn to it. In times where I would previously pick up my iPad to complete a task, I’m now doing it on the iPhone (including typing out the entire first draft of this post).

Like I said at the top, I’ve had every iPhone since the iPhone 4. I’ve loved them all. If there was no iPhone X this year, I would’ve gotten the iPhone 8 Plus and I probably would’ve loved that too7. However, I’ve never been as delighted with a new iPhone as I am with this one.

I’ve heard people say that this phone gives them the same feeling that they had when experiencing the original iPhone. I never owned that phone, but it makes complete sense. The closest I’ve felt to this experience would be my original iPhone 4, but nothing else comes close. If you’re at all interested in this stuff (and I assume you are, otherwise why are you still here?) you should listen to this week’s episode of The Talk Show. It nails so much of what I’ve tried to express here. Between the inherent quirks of OLED displays and the first generation quirks of Face ID, this is the least ‘perfect’ iPhone in a long time; but everything about it feels so cool that you don’t just forgive it, you embrace it.

Every Apple product is better than the one before it, that’s a given, but I can honestly say that this is hands-down my favorite experience with an Apple product yet. The torch has been handed over from the AirPods.