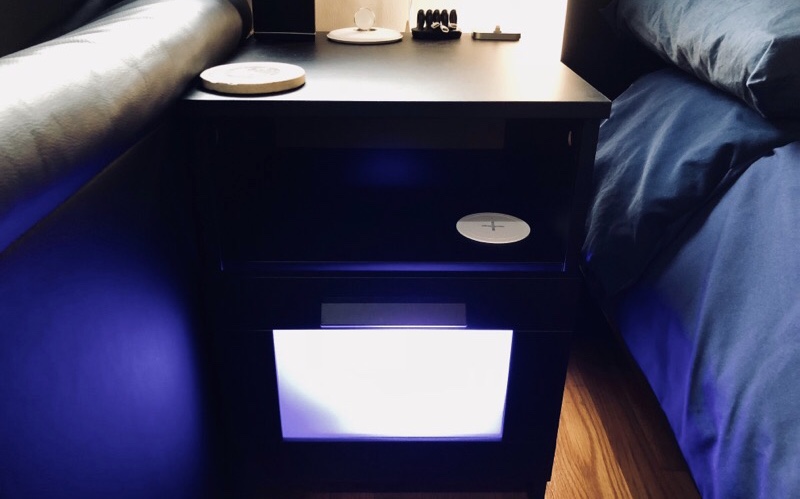 One of the tentpole features of the iPhones 8 and iPhone X this year has been the glass back and wireless charging. Apple elected to use the Qi standard, which has been around for almost a decade, so there were lots of third-party accessories already available at launch. Apple has chosen to promote two: Belkin (bad) and Mophie (good). However, I decided to go a different route.

A lot of people consider wireless charging as it exists today to be a gimmick. It’s slow and makes it hard to use your phone while charging. While that’s a very valid argument, I like to think about it from another angle: Magic Furniture.

Installation was as simple as charging the drill, connecting the hole saw, and picking two pieces of furniture to put a hole through. I went with my nightstand and a side table I have by the couch. Once the hole is drilled, you drop the charger in from the top. There’s a ring around it to keep it stable and in place. The entire process took about 30 minutes for the two tables. That includes taking intermittent breaks for the drill to cool down, vacuuming the debris, and wiping the table before connecting the charger.

While I did buy both the RÄLLEN and JYSSEN, I’ve only used the latter a couple of times. It’s on a table that’s less accessible to me usually. I bought it because it was 40% off on a clearance sale. While it looks identical to the RÄLLEN at first glance, you can push down on the JYSSEN and it pops up to expose a hidden USB charger. That makes it a good option to have for guests (I often have friends over charging their phones in my room - this felt like a good solution for that). I set up the RÄLLEN on my nightstand and it’s the one I’ll focus on for the rest of the review.

I have the IKEA BRIMNES bedside table. I elected to install the RÄLLEN on the shelf in the middle of the unit. The shelf slides out which makes installation super easy, and the back of the unit behind and underneath it is open, meaning that there are no exposed wires. It looks so seamless that I wouldn’t be surprised if IKEA started selling this as a set in the future.

The ‘sweet spot’ of this charger is fairly generous, as far as I can tell. I haven’t had to fiddle around to get it to start charging. I have the white charger which accents the table’s black wood quite nicely, and makes it somewhat visible in the dark, so I’ve had no issues setting my phone down on the pad late at night.

I’ve heard stories of some people having issues with their phones vibrating off wireless chargers at night - especially with the Belkin charger that Apple promotes. While this charger feels sufficiently grippy, I have ‘Vibrate on Silent’ turned off on my iPhone2 (and Do Not Disturb scheduled while I sleep) so I can’t imagine this being an issue. Even with vibration turned off though, my phone still vibrates once it makes contact with the charger. This lets me set it down (often blindly in the dark) without having to worry that I missed the charger. There’s an ever-so-small LED indicator light on the RÄLLEN but it gets covered up by the resting iPhone, so I have no idea why it’s even there.

My biggest reservation with picking this charger was the charging speed. As of writing, all of IKEA’s wireless chargers have a max speed of 5W. The impending iOS 11.2 update is set to enable charging speeds of 7.5W and both the Belkin and Mophie chargers will support this. However, looking at early results in beta, the gains are negligible. I rarely charge my iPhone midday so having it charge a little slower while I sleep is fine. If I need to top up the battery quickly before heading out, having 7.5W (instead of 5W) isn’t going to make a difference. I’m still going to plug in the 29W iPad charger instead - I can get about 50% battery in 30 minutes with that charger.

Lastly, one of my favorite things about the RÄLLEN is its design. Like I mentioned earlier: There’s a ring around the top of it that keeps it stable and in place. So to remove it, you just push it up from the bottom. This means that if IKEA decides to update the line with 7.5W charging, or if I decide to swap out the white charger for a black one, I can replace my current setup with ease.

Apple briefly mentioned an AirPower wireless charging mat alongside the new iPhones. We know nothing about the price or the release date (Apple says it’s “available in 2018”). What we do know is that it’ll charge an iPhone, Apple Watch, and AirPods simultaneously. Given that I charge all three of those devices bedside, and that I’m always looking to simplify my travel setup, I’m poised to pick up two of these. Yet this still hasn’t deterred me from going all-in on IKEA’s line of chargers.

I, like John Siracusa, fully expect Apple to price AirPower at close to $200. I’ll still pick up one at launch at that price for my nightstand3 but I can’t see myself littering my furniture with a plethora of AirPower mats. Yet that’s exactly what I want to do with wireless charging.

My goal is to have as much furniture as I can have an integrated charger. If I can wire it so that the trailing cable is completely hidden, I will. I want magic furniture everywhere. Now that I’ve bought the drill and hole saw, each additional charger I buy will cost me $12. That’s 40% less than the price of an Apple Lightning Cable alone, and 70% cheaper if you include the speed-equivalent 5W USB Charger.

I might not need to charge my iPhone midday most days but I really like the idea of being able to naturally drop my iPhone down on a table and have it pick up a little extra charge. Best I can tell, the RÄLLEN seems to be the most frictionless way to do that — both in price and in practice.4