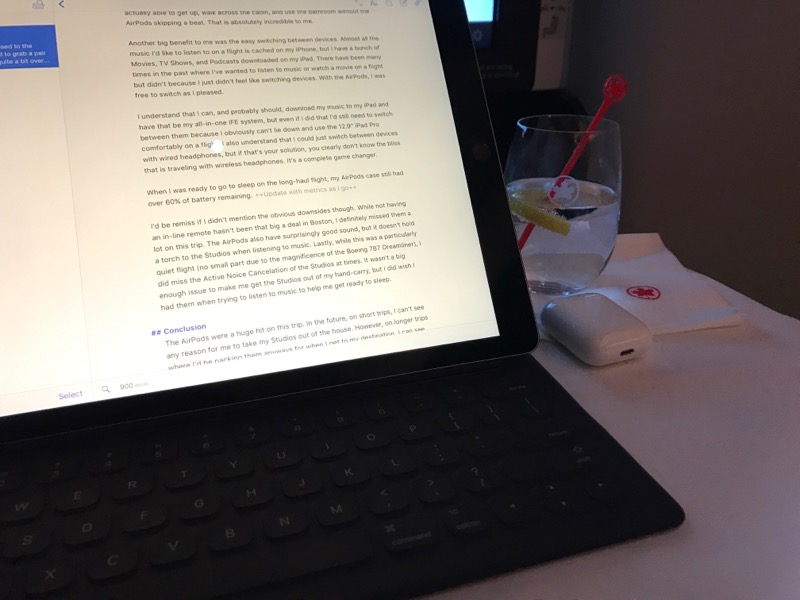 Apple’s AirPods were finally released to the public on Monday, and I managed to grab a pair at launch. I’ve been using them quite a bit over the last couple of days and I abslolutely love them. Right off the bat, I’ll say that this is my second-favorite new Apple product since 2013, behind only the Pencil.

However, if there’s one thing I’ve learned over the years, it’s that nothing puts your tech through its paces quite like long-haul travel. And as luck would have it, I was making one such trip just two days after getting the AirPods. So, how did they fare? (Spoiler: outstandingly well).

I was scheduled to fly from Boston to Accra via Toronto and Istanbul, with 2 and 7 hour transits respectively.

In Boston, my flight was heavily delayed, so I ended up spending 4 hours at the gate before boarding. I wore the AirPods pretty much throughout that time, and for most of the 90 minute flight to Toronto. My transit time in Toronto was cut to naught because of the delay, and then it was time for the main event: a 9 hour transatlantic flight to Istanbul. I then spent 6 hours in the Turkish Airlines lounge at Ataturk Airport, before boarding my final 7 hour flight to Accra.

Usually when I make this trip1, my Beats Studio Wireless don’t leave my neck from the time I leave home until I fall asleep on the transatlantic flight, at which point I charge them for my transit in Istanbul and the last flight to Accra. But while I brought the Studios with me on this trip, at no point did I feel compelled to take them out of my bag.

The AirPods are much smaller and lighter than my Beats, and I didn’t expect to appreciate that as much as I did. Being able to take them out and put them in my pocket was so much more convenient than having to carry the Studios or leave them wrapped around my neck. I also felt like I could listen to use them for longer periods of time than the Studios, which are closed headphones and thus create a bunch of heat.

On the plane, being able to pull out one of the headphones and have my podcast/movie automatically pause so that I could interact with cabin crew (and resume when I put it back) was a very big plus. During meals, when I was talking to a member of cabin crew pretty often, I took out one headphone and put it back in the case, at which point the AirPods routed the sound from stereo to mono — a beautiful little detail. And don’t even get me started on the range. I was listening to a podcast on my iPad when I decided to visit the restroom, and I was actually able to get up, walk across the cabin, and use the facilities (with the iPad still at my seat) without the AirPods skipping a beat. I thought that was absolutely incredible.

Another big benefit to me was the easy switching between devices. Almost all the music I’d like to listen to on a flight is cached on my iPhone, but I have a bunch of Movies, TV Shows, and Podcasts downloaded on my iPad. There have been many times in the past where I’ve wanted to listen to music or watch a movie on a flight but didn’t because I just didn’t feel like switching devices. With the AirPods, I was free to switch as I pleased — and so I did. I understand that I can, and probably should, download my music to my iPad and have that be my all-in-one IFE system, but even if I did that I’d still need to switch between them because I obviously can’t lie down and use the 12.9” iPad Pro comfortably on a flight. I also understand that I could just switch between devices with wired headphones, but if that’s your solution, you clearly don’t know the bliss that is traveling with wireless headphones. It’s a complete game changer.

When I was woken up for breakfast an hour before arriving in Istanbul, the AirPods had just over 50% of battery remaining (after 18 hours of use, and with 15 hours of travel remaining). I had slept for 5 hours on that flight, and I tend to travel with an Anker battery and a bunch of Lightning cables, so I could have charged the AirPods pretty easily, but I wanted to see if they could make it through the trip on a single charge. It turns out, I could. I used the AirPods for a few hours in the lounge, and then for a few more hours on the flight to watch a movie. And by the time I got home, 33 hours after leaving Boston, the case had about 5% remaining and the AirPods were fully charged (i.e. I still had about 5 hours of battery life remaining). That’s without me babying them in any way; at no point did I want to listen to something but didn’t because I was afraid that the battery will run out. That doesn’t happen with the Studios. Not only do I always have to find a few hours to charge it, but I have to carry around a micro-USB cable just for it.

So what do we have here? Incredibly portable headphones with enough passthrough to use safely in a busy airport, and a very practical play/pause mechanism, with outstanding range and enough battery life to make it through almost two days of travel on a single charge. To me, that’s easily worth the asking price of $159. No question about that.

But while there’s a lot to love about the AirPods, I’d be remiss if I didn’t mention the obvious downsides. I definitely missed having an in-line remote a lot on this trip for volume control. And while the AirPods have surprisingly good sound, it’s nothing compared to the Studios — especially when listening to music. Lastly, while these were particularly quiet flights (in no small part due to the magnificence of the Boeing 787 Dreamliner), I did miss the Active Noice Cancelation of the Studios at times. It wasn’t a big enough issue to make me get them out of my carry-on2, but I did wish I had them during takeoff and landing.

The AirPods were a huge hit on this trip. In the future, on short trips, I can’t see any reason for me to bring the Studios with me. However, on longer trips where I’d be packing them anyways for when I get to my destination, I can see myself leaving them in my carry-on to at least have that option. But long gone are the days of me walking through the terminal deaf to the world around me.

I should also note that I spent most of this trip in airline lounges and a fairly spacious business class open suite. In economy, which is typically a lot louder and a lot more cramped, I might be more inclined to bring the Studios for their active noise cancellation and because I’m far less likely to lose them. My last flight to Accra ended up being in economy class and I woke up to pack the AirPods after dozing off because I was worried that someone might accidentally nudge them out of my ear while I was asleep.

Either way, the AirPods are undoubtedly my favorite new Apple product of the last couple of years, and I sense that they’re going to go on to completely change the way I listen to music. I’m sold on Apple’s idea of the future of wireless audio playback. Bring on W1 everywhere.